Biden strains for a message on deteriorating economy

Team Work June 14, 2022 Comprehensive Comments Off on Biden strains for a message on deteriorating economy 4 Views 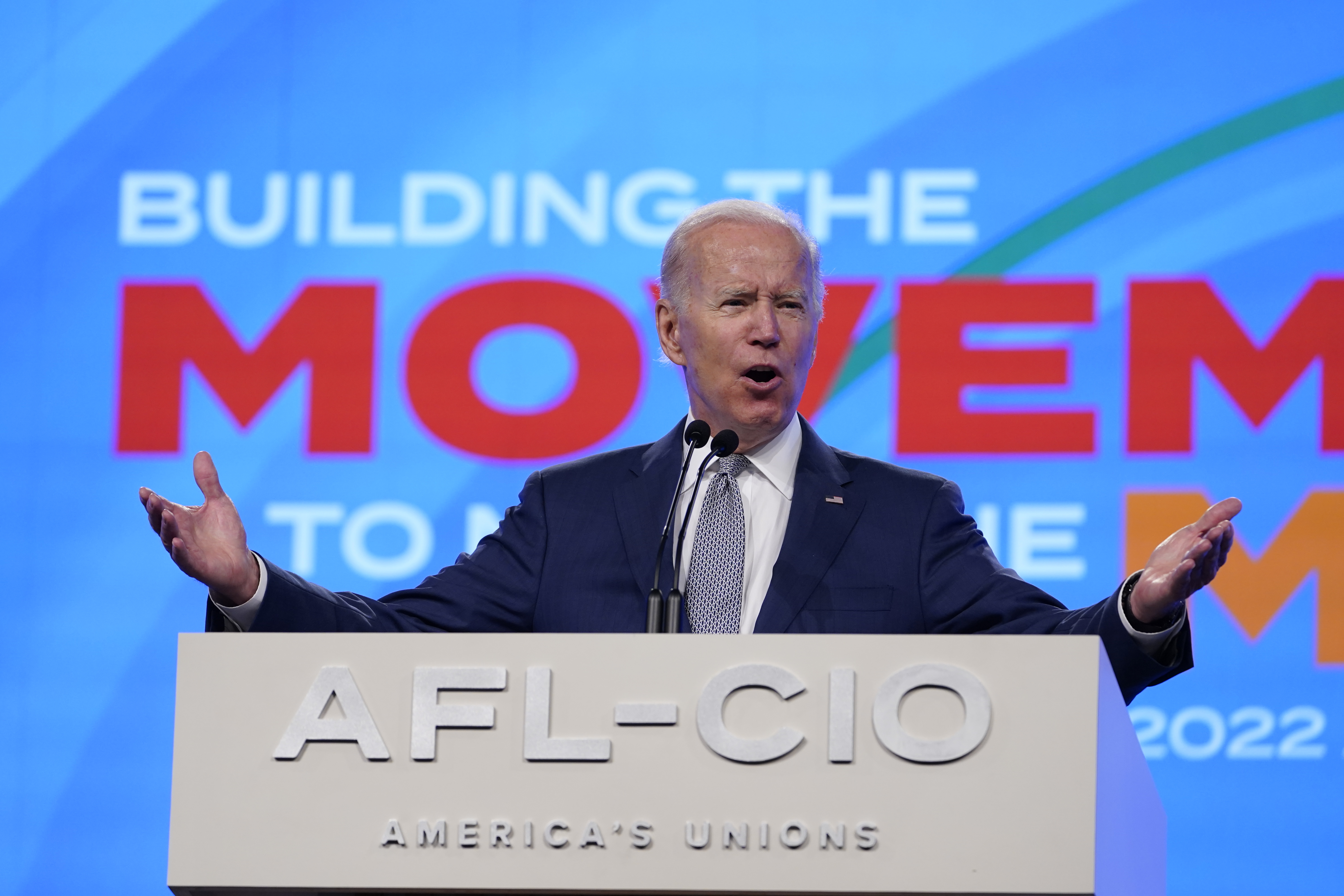 So the White House has started to change up its messaging on inflation, even though President Joe Biden has limited tools at his disposal to battle the crisis. The president stepped up efforts to draw contrasts with Republicans, unleashing a series of new attack lines Tuesday in a speech delivered amid a flurry of sobering headlines on rising costs and interest rates.

“America still has a choice to make. A choice between a government by the few, for the few,” Biden said at an AFL-CIO union convention in Philadelphia. “Or a government for all of us – a democracy for all of us, an economy where all of us have a fair shot.”

But with the midterms rapidly approaching, voters’ patience appears likely to run out – and the president and party in power stand poised to pay the political price.

“Recognizing that reality trumps messaging, and there is no silver bullet message that makes people feel better about a tough economic situation, the best thing the White House can do right now is show voters that they are trying,” he said.

Many of the forces behind rising costs – the pandemic, global stimulus packages, supply chain snarls, Russia’s invasion of Ukraine – took place well outside Biden’s control. But the administration has been criticized for being slow to act and for being sluggish in adjusting its messaging.

The White House had initially believed that inflation, which began last year, would be transitory and potentially even clear by this summer as voters began to think about November. Then, after that assumption proved faulty, there was belief that it had peaked in April and would soon start declining.

But that proved wrong, too. Prices rose 8.6 percent in May compared with a year earlier, the highest level in 40 years, according to the latest consumer price index released Friday. Moreover, prices climbed more quickly last month than they did in April, suggesting the inflationary peak had not yet arrived.

As the bad numbers piled up, Treasury Secretary Janet Yellen publicly admitted the obvious, saying the administration got it wrong on inflation. The statement, though true, was met with grimaces in the West Wing, where aides noted that most leading forecasters and the Federal Reserve got it wrong, too.

Indeed, the task of combating inflation primarily falls to the Fed, which is expected in its meeting Wednesday to hike interest rates, potentially as much as a larger-than-expected 0.75-percentage-point. But it’s unknown how much inflation will slow before November and the problem has consumed Biden’s top aides and has threatened to overwhelm both his domestic and international agendas.

Senior White House aides have repeatedly huddled to push agencies to look for steps to cut costs for Americans. Biden, meanwhile, has expressed frustration to aides that he hasn’t been able to do more, blaming the hand he inherited from President Donald Trump and calling inflation the “bane of our existence” for days inside West Wing meetings. He repeated the line last week during a late-night TV interview.

Polls suggest that inflation, more than the war in Europe or the recent spate of mass shootings, is front of mind for voters, with the midterms less than five months away. With an eye on the calendar, the White House has made a new push to recast how it is fighting rising costs.

One key metric for the White House: Getting the rate of price increases (over 8 percent) lower than the current pace of wage increases (around 5 percent.) That overall decrease in buying power has led millions of Americans to ignore positive economic news. Touting the good numbers, as the White House has done, has risked making Biden seem disconnected from people’s daily experience.

Democrats also have sharpened their attacks on Republicans, calling them out for not putting forth their own solutions while also endorsing some of the measures – including economic plans enacted by Trump – that helped trigger the rising prices. Biden himself has singled out a plan by Sen. Rick Scott (R-Fla.) as continuing GOP’s efforts to hurt working Americans, and pushed back against claims that the administration overheated the economy.

But Republicans have stayed on message, blaming inflation on Democratic spending programs enacted during the pandemic.

“Democrats shamelessly used the pandemic to pursue their socialist dreams of government dependency,” said House Minority Whip Steve Scalise (R-La.). “They paid people not to work, handed out big stimulus checks, and expanded government health care programs — ignoring all the warnings about the inflation it would cause.”

On gas prices, Biden released an unprecedentedly large amount from the strategic oil reserves. On Tuesday, the administration announced the president would be traveling to Saudi Arabia next month on a visit partly intended to push the kingdom to produce more oil. Biden had expressed repeatedly reluctance to visit a nation he once deemed a “pariah” and meet with Saudi Crown Prince Mohammed bin Salman Al Saud, who was deemed responsible for the murder and dismemberment of Washington Post columnist Jamal Khashoggi.

Biden visited the Port of Los Angeles last week to tout work the administration has done to unblock supply chain snags. And aides are quick to note that inflation is a global problem and that the United States’ economy has recovered faster than other nations. Unemployment has also fallen to 3.5 percent, just about to pre-pandemic levels.

The White House recently rolled out a presidential op-ed in the Wall Street Journal that unveiled his plan to fight inflation. It included letting the Fed do its rate-hiking job unfettered by presidential pressure and a laundry list of previously announced initiatives to fix broken supply chains, spend more on infrastructure and offer more child-care and clean energy tax credits.

Much of that requires action by Congress, which seems unlikely the rest of this year unless the administration can get some of its agenda into a budget reconciliation bill. Even then, White House aides concede, none of the efforts will yield near-term inflation relief.

History is littered with examples of presidencies dashed by inflation and shaky economies. And some economists fear that an improvement for Biden could be months off.

“I’ve been skeptical of the peak inflation story and I still am,” former Treasury Secretary Larry Summers, who famously predicted a big inflation spike before the White House’s nearly $2 trillion American Rescue Plan passed Congress without a Republican vote last year, said in an interview.

“It continues to be my view that we are unlikely to get inflation down in a way that involves a soft landing and without a near-term substantial increase in unemployment,” Summers said.

Wendy Schiller, director of A. Alfred Taubman Center for American Politics and Policy at Brown University, said “all presidents are typically held accountable for the state of the economy, but since Franklin Delano Roosevelt made fixing the Great Depression the pillar of his presidency, the intensity of both expectation and blame on the presidency for economic conditions has increased.”

“The literal saving grace for Biden, but not Congressional Democrats,” she said, “is that he still has two years for things to stabilize.”

Previous The Fastest Growing Entry-Level Jobs, According to LinkedIn
Next Fact check: 10 Trump election lies his own officials called false