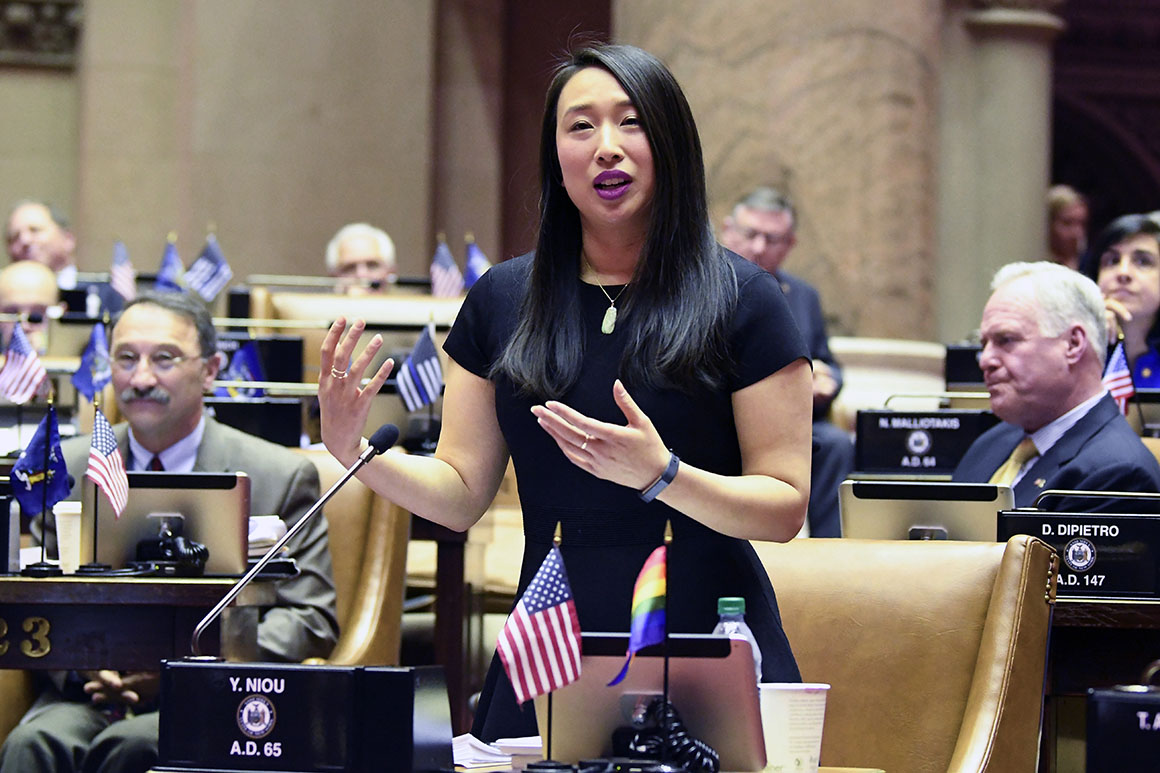 When the new 10th Congressional District united Chinatowns in Manhattan and Brooklyn’s Sunset Park, it created an electorate with more than 20 percent Asian American voters. The Taiwanese American Niou quickly pivoted from running for the state Senate to the new U.S. House seat. So quickly, in fact, her staff had crossed out “State Senate” on its campaign literature and written “Congress NY-10!” in marker.

“I feel like it would have almost been like a disservice not to run, in some ways,” Niou, a 38-year-old assemblymember, said on the sidelines of a community festival in the Alphabet City neighborhood of Manhattan. “We really need to make sure that we have representation, because when we do have that representation, it changes a lot of the perspective and the lenses that we legislate in.”

Niou knows she faces potentially better-funded and higher-profile candidates in the district’s pileup of a Democratic primary. But if she can prevail, she’d have a demonstrable impact on diversity in Congress: Only 17 Asian American lawmakers currently serve there, a number that grew in the 2020 election even as the Congressional Asian Pacific American Caucus took on a higher-profile role, shepherding through legislation addressing a surge in hate crimes during the pandemic. 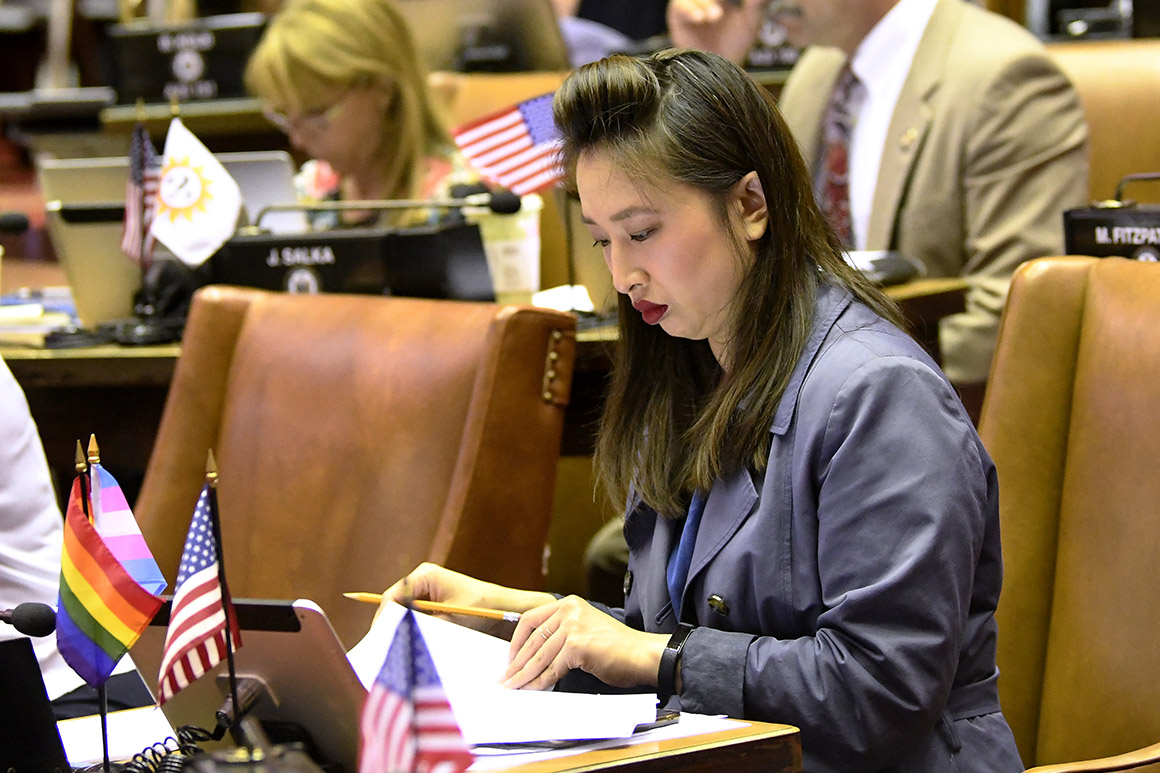 And notably, the race has no clear frontrunner to represent one of the most progressive districts in the country. A smattering of voters interviewed couldn’t say who they’d vote for — if they even knew who was running (several did know about former New York City Mayor Bill de Blasio’s bid, but said they didn’t want him in office again). It’s there that Niou sees her chance.

“I see myself as the underdog, but I also see myself winning,” she said. “There’s a lot of erasure, especially when women and women of color run. There’s a lot of focus on when big names are running — or like when, you know, it’s men.”

In addition to de Blasio, Niou faces Rep. Mondaire Jones (D-N.Y.), who currently lives in and represents a district more than 30 miles north of the 10th but declared last month he would run there. Former Rep. Liz Holtzman (D-N.Y.), who last served in the House more than 40 years ago, also filed to run Tuesday, among others who are reportedly weighing bids.

The energetic, earnest assemblymember doesn’t have a traditional approach to retail politics. As she walked through the festival with a “Lower Beast Side” sticker stuck to her coral flare joggers, with a pit stop for an empanadilla, she said she just wanted to talk to some familiar faces after the annual event’s two-year Covid hiatus: “My crew is doing some petitioning, but I’m just here to see my people.”

Niou is staking out a position as a housing advocate with a granular knowledge of her constituents’ needs, a particularly salient issue given New York’s skyrocketing real estate and rent costs. It’s resonated in the district, as her mix of progressive policy positions and frequent engagement with supporters has garnered her a large social media following.

But the Aug. 23 primary will be the real test — her first race at the federal level.

It’s a huge and abrupt shift in focus. Only a few weeks ago, Niou was waging a primary challenge against an incumbent state senator, Brian Kavanaugh. In addition to the freshly crossed-out campaign fliers, her campaign’s listing on the street festival directory still said, “Yuh-Line Nou [sic] for Senate.”

Niou and the gaggle of other congressional candidates have just under three months to sell themselves to voters and raise enough funds to effectively compete in one of the most expensive media markets in the country. Jones has the early lead in fundraising, with nearly $3 million dollars in the bank at the end of March, according to public filings. He’s also picked up endorsements from national Democratic groups like the Progressive Caucus’ PAC and the Equality Caucus’ PAC.

“Yuh-Line is a fierce campaigner. It’s not impossible … but she’s going to have to do this in a smart way,” said George Arzt, a Democratic political consultant not working with any of the candidates.

Her path to victory could run through the district’s two Chinatowns. Asian American voters aren’t monolithic or necessarily progressive; Republican mayoral candidate Curtis Sliwa won nearly half of the vote in Sunset Park last year, after all. However, Niou argued her representation could carry greater weight given the rise in pandemic-era hate crimes against Asian Americans. She had personally experienced the burden of death threats as a state elected official, she said, and had her own theories on how to counter it.

“When we’re talking about the anti-Asian hate, I just realized that the biggest way to combat that is to be more visible, it is to be present, and it is to change the conversation,” she said.

In a primary more likely to be decided by a plurality than a majority, Niou is banking on ties to the district that she built through her time in the state Assembly. Part of that effort means constant outreach to Asian American communities.

“I think the thing to not underestimate in New York-10 is going to be the reunification of Chinatown,” said Whitney Hu, who supports Niou and is the director of civic engagement and research at Churches United for Fair Housing. “I think having a bloc is going to give her an advantage over other candidates who are trying to fight for the progressive lane.”

Niou has won races for her Assembly seat, which is entirely inside the new congressional district, by lopsided margins since she was first elected. Her tenure as a legislator has made an impact on voters like Julie Stark, a 57-year-old attorney, who walked up to introduce herself to Niou at the festival and offered to volunteer for the campaign.

“I was in her district when she was the state rep, and I think that she did an absolutely incredible job of serving the community during the pandemic. Her office reached out to me to see if I needed anything,” Stark said. “She helped me navigate some issues I was having with unemployment.”

The local ties could be a deciding factor in the race, especially as candidates look to draw a contrast with Jones, who is not from the district. Voters still care about candidates’ roots, some observers said.

“It’s certainly a factor when people go to vote,” said Hunter Rabinowitz, the president of the Brooklyn Young Democrats, whose group has not yet endorsed a candidate. “People love people that come from the community. It’s a huge, huge thing in New York.”

Niou’s campaign is emblematic of grassroots progressive efforts, attracting energetic young people willing to stump aggressively for their candidate. Her enthusiastic volunteers at the festival fanned out from their table, sandwiched between a Puerto Rican food vendor and a nonprofit’s microscope demonstration, at one point finding a middle-aged white man whom they thought was just another voter.

He politely declined her volunteers’ questions and walked away.