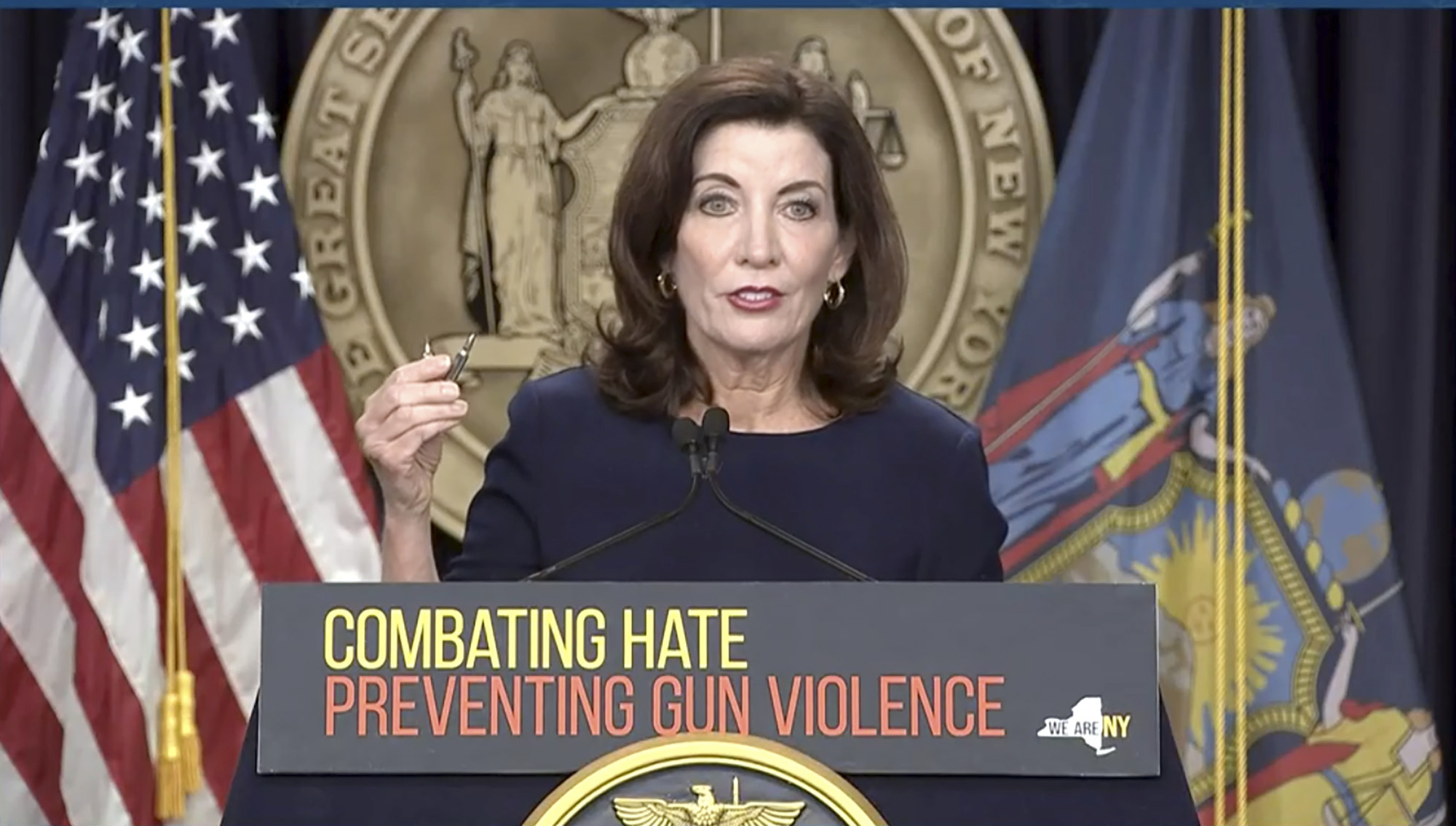 ALBANY, N.Y. — New York is set to become one of the first states in the nation to pass a package of new gun restrictions in direct response to the shootings in Buffalo and Texas that have rattled the nation and spurred renewed calls for action.

The new laws sought by moderate Democratic Gov. Kathy Hochul and the state’s liberal Legislature would further tighten and strengthen New York’s gun ownership restrictions, including raising the age from 18 to 21 for the purchase of semi-automatic rifles like those used in the recent shootings.

The urgency this week comes in part from grief after the shooting in the state’s second largest city, Buffalo, in which 10 people were killed in a racist supermarket attack last month. But it’s also a response to the failure of the state’s strict background checks and “Red Flag” law to prevent the shooting, Senate Majority Leader Andrea Stewart-Cousins told reporters in the Capitol Wednesday, and an attempt to close loopholes in some of the nation’s most stringent gun laws.

“We’ve done a lot. On the national level, they are talking about the things that we’ve already done,” Stewart-Cousins said. “So we continue to lead, and to try to answer the moment as it occurs.”

The leaders plan to pass the package before the state’s legislative session wraps up on Thursday — nine years after Albany enacted a different set of gun restrictions following the Sandy Hook school shooting. Those rules led to strong criticism from Second Amendment advocates, including bumper stickers and protest signs critical of then-Gov. Andrew Cuomo, who pushed the measures, called the SAFE Act, through the then-Republican-led Senate.

The political climate this year offers a more fertile ground for passage in the Legislature’s dual Democratic-controlled chambers. 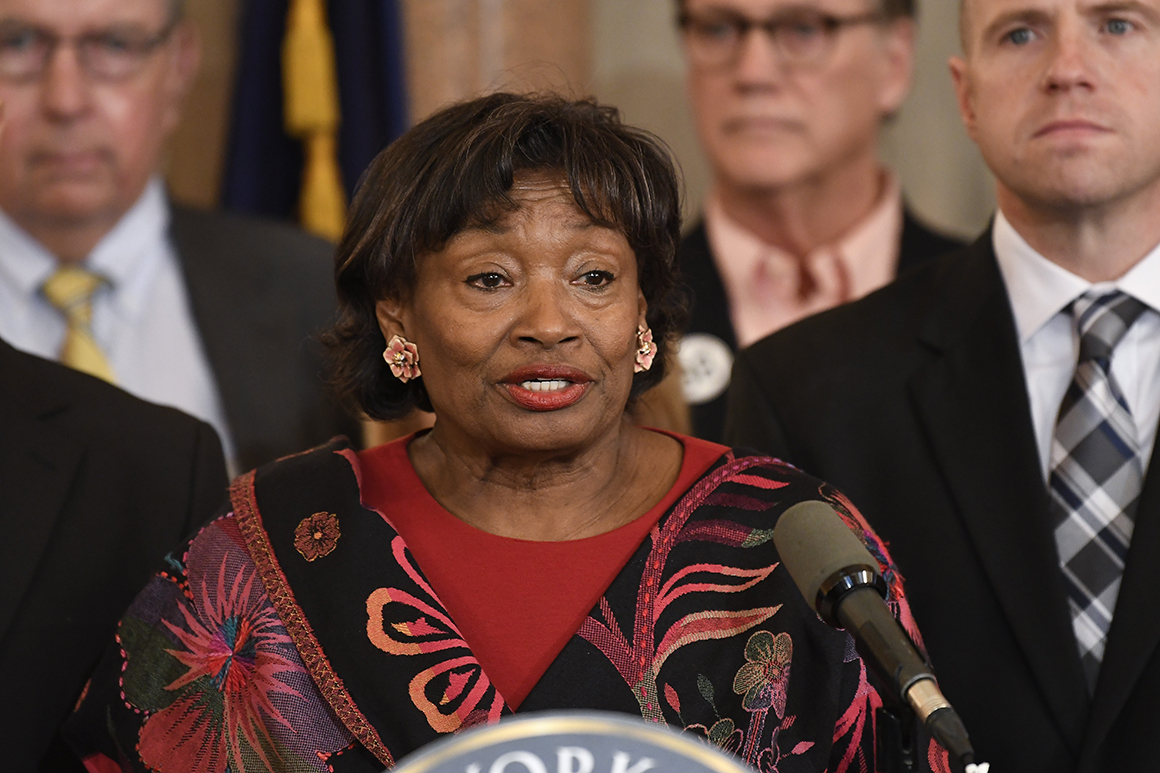 While lawmakers often hesitate to act on controversial issues during an election year — Hochul and every state legislator are up for reelection this year — they are framing new restrictions as a way to combat rising gun violence and voters naming crime the most important issue as they choose candidates this year.

“I really look at this package as being very comprehensive, holistic in its approach to addressing this public health crisis,” said Rebecca Fischer, the executive director of New Yorkers Against Gun Violence. “I think that for states like Connecticut, and New Jersey, California, these are laws that can be used as a model to get them up to speed right away.”

Some say they’re still not finished. Hochul and lawmakers are moving forward as New York braces for a U.S. Supreme Court ruling that could overturn the state’s limited ban on concealed carry permits.

Many of New York’s Democrats are in a “state of apprehension” about that decision, said Sen. Zellnor Myrie, a Brooklyn Democrat who last year successfully passed a bill allowing for civil suits to proceed against those who irresponsibly sell, manufacture, import or market firearms. And he believes the state needs to prepare a reaction for when the Supreme Court ruling does come down.

“I think we’re at a moment where the public is expecting us to put everything on the table. And I don’t think we can do enough. I think we can always be doing more gun safety. And my hope is that this doesn’t just happen in the wake of a tragedy, but that we maintain this energy.”

New York City Mayor Eric Adams warned that if the Supreme Court overturns the state’s concealed carry law, it would make the streets more dangerous at a time when the former city cop has made fighting crime his top priority.

“People are going to have the right to openly carry in our cities,” he told reporters Tuesday. “That something we should be alarmed about.” 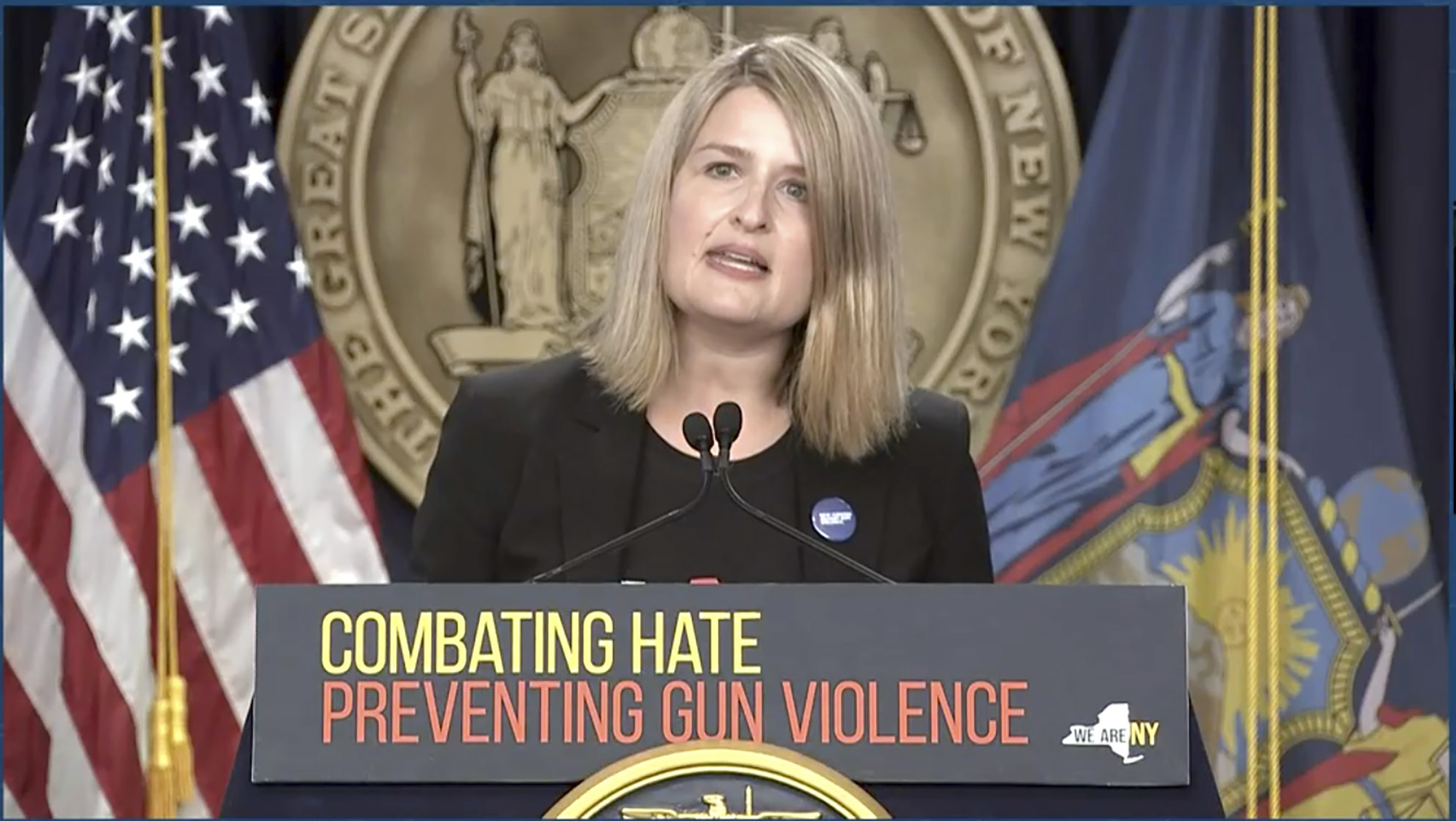 The package of bills set for passage, some of which were already in the works prior to the Buffalo shooting, attempt to fortify existing laws.

The Red Flag law, which allows for the seizure of guns from individuals determined to pose a risk to themselves or others, would be expanded to allow more people — such as health practitioners — to file risk orders. And it requires, rather than allows, law enforcement to file an order if credible information emerges.

The alleged shooter in Buffalo, who is age 18, was previously referred for a mental health evaluation and counseling after reportedly threatening a shooting at his high school last year. But the police who investigated and school administrators did not file under the Red Flag law to block him from possessing guns.

“There was nothing stopping either of those stakeholders, the police, the school administrator, from filing a petition, while waiting for the mental health evaluation,” Fischer said. “If we put a law on the books that requires law enforcement to look a little further, it’s more likely that this will be tapped into and that that law enforcement on the ground will be trained to know that this is a tool that they can use.”

The package set to pass in New York also includes adding semi-automatic rifles to the weapons requiring a permit available to those over the age of 21. The state currently requires permits for handguns, but not rifles.

An age restriction on rifle sales in California has faced a constitutional challenge, but Fischer said that adding it to the existing permitting regime should insulate it from potential litigation.

Another bill would ban the sale of body armor to people outside law enforcement or other state-designated professions. A security guard at the Tops supermarket tried to fire back at the shooter, but was unable to stop him because he struck body armor instead.

Whether other states will be able to build upon the path New York is treading remains up for debate.

Most New York Republicans have ripped the new proposals, saying the focus should be on mental health and more school resource officers.

“I do not support gun control. I stand up for the constitutional rights of law-abiding citizens, but there’s work that we need to do and that is increasing mental health funding and increasing those resources for school resource officers,” Rep. Elise Stefanik (R-N.Y) told reporters outside the state Capitol on Tuesday.

Marc Molinaro, the Dutchess County executive and a Republican candidate for Congress, said New York’s Red Flag law failed to identify the 18-year-old Buffalo shooter and the state should more quickly look to prosecute people who post hateful and violent messages on social media before they go on a rampage.

“New York has the strongest gun laws in the nation,” he said.

“Where we are failing, and the governor half acknowledged, is that we know the characteristics, we know the traits, we know the actions, in particular, young men who act out with hate-filled violence” but aren’t taking more aggressive action, Molinaro added.

But their voices are unlikely to break the momentum Democrats were harnessing even before the Buffalo shooting, which Hochul, on Wednesday, said only expedited the need for new laws before the legislative session ends this week.

“We’re going to have a package that people are going to be proud of, and it’s going to close some of the loopholes, but also say that 18 year olds who cannot buy a beer at the local bar should not be able to buy an assault weapon,” Hochul said Wednesday on Fox5NY. “We’re going to change that immediately.”

Joseph Spector contributed to this report.