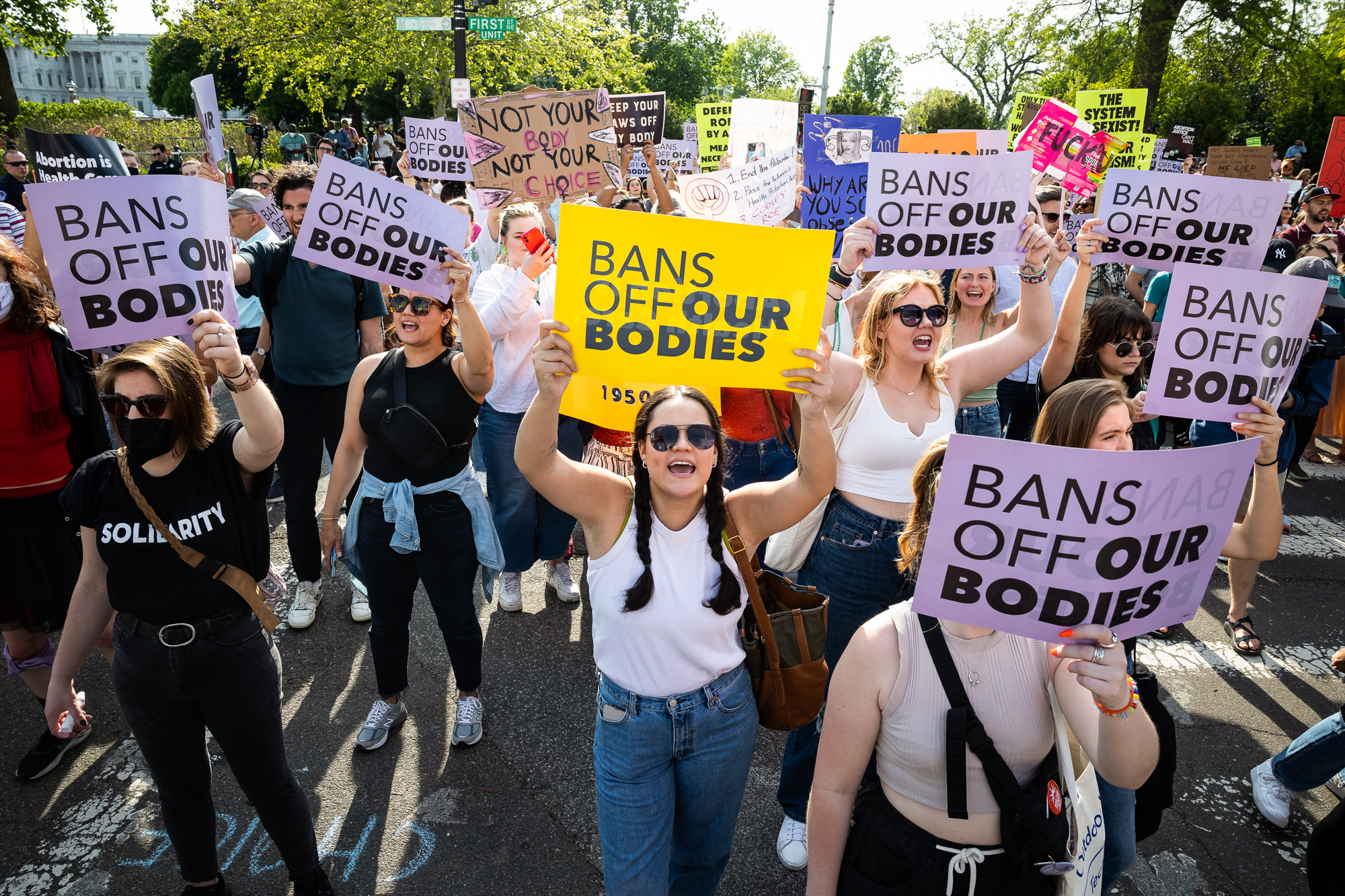 Throughout the last half century, two assertions about abortion have been widely accepted:

First, if Roe v. Wade was ever overturned, abortion would once again become a matter for the states to decide. The practice would be banned, restricted, permitted or subsidized depending on the political terrain: California and Idaho would be very different places. Federalism in action.

Second, if Roe was ever overturned, the political fallout would benefit Democrats, who reflect the majority opinion that support Roe. Republicans would face a reckoning at the ballot box.

Today, neither of these assertions are nearly as certain as they once might have been. And if the second assertion proves false — if the abortion issue either lacks political punch or in fact turns out to be an asset for abortion foes — then the first assertion may be on shaky ground.

To put it more bluntly, it is at least plausible that in the early days of 2025, a Republican Congress will pass, and the new Republican president will sign, a law effectively outlawing abortion everywhere in the United States. Whatever the voters of California or New York or New England wish will simply not matter. Further, such new laws would likely be far more restrictive than the laws that were in place before Roe v. Wade was ever decided.

In his draft opinion disclosed by POLITICO, Justice Samuel Alito embraces the view held most consistently and forcefully by the late Justice Antonin Scalia: The Constitution has nothing whatsoever to say about abortion. There is no such right, he says, to be found anywhere in the document or in its amendments. Without Roe, the decision devolves, appropriately, to the political class — to legislators and elected executives.

This has always meant that states are where decisions are to be made. The federal government has made policy at the margins: The Hyde amendment bars federal funding of abortion; Congress banned so-called late-term abortions almost 20 years go, and aid to groups offering abortions flows and recedes depending on which party is in the White House.

But divisions in Congress, as well as the one-time presence of many pro-abortion rights Republicans and anti-abortion Democrats, have made sweeping federal laws all but impossible to enact. Today, as Democratic leaders try to codify abortion rights protections, they face the same obstacles they have faced in enacting sweeping social spending measures or voting rights laws; there are 50 Democrats, one of whom (Joe Manchin) is a foe of abortion rights, and another (Kyrsten Sinema) who will not support putting aside the filibuster to pass such a law. The two Republican senators who back abortion rights — Lisa Murkowski and Susan Collins — do not support a temporary pause on the filibuster either.

The answer to this obstacle, the argument goes, lies in the impending political response to the court’s pending decision. Citing polls that show a clear majority in favor of maintaining Roe, some progressives see this fall’s midterms as a chance to elect more allies to the House and Senate to put a bill on President Joe Biden’s desk that in effect legislates the protections of Roe — a process even this Supreme Court might find hard to strike down.

Here’s the problem: The reaction to the end of Roe may not be what proponents hope it will be.

First, the polls on abortion are murky; depending on how the question is asked, you get very different responses. Yes, most believe the decision should between a patient and their doctor; most believe Roe should be retained. In another poll, a plurality believe abortion should be more restricted; a fifth believe abortion should always be illegal, a quarter believe that abortion should always be legal. Add to this the wide variances depending on states, and the political impact of the issue becomes even more clouded. The issue plays very differently at the state level, which is why, even before the draft Roe decision came out, a near-majority of states had either enacted restrictions, including outright bans, or passed “triggering” laws to go into effect as soon as Roe is formally overturned.

Second, as a voting issue, abortion has tended to work on behalf of the side dissatisfied with the status quo. If you believe Roe was misguided, or evil, you want the policy to change. The most dramatic example of this came in 2016, when a Supreme Court seat was clearly on the line in the presidential race. Twenty percent of voters said the court was the major issue of the race; among those voters, Donald Trump beat Hillary Clinton 56-41. It was a key reason why Trump won the evangelical vote, despite his previous escapades and vulgar behavior.

If the energy behind abortion depends on who is most discontent with the status quo, then shouldn’t the pro-abortion rights side benefit from the overturn of Roe? There are two reasons to be cautious. First, the issue in November may not be as much of a motivating political force compared with, say, inflation. Second, for the foes of abortion, overturning Roe is only a first step; leaving the decision to the states still means hundreds of thousands of abortions every year.

In a prescient story, published just hours before the Alito draft opinion was disclosed, the Washington Post reported that national anti-abortion groups are planning “a push for a strict nationwide ban on the procedure if Republicans retake power in Washington. … The discussions reflect what activists describe as an emerging consensus in some corners of the antiabortion movement to push for hard-line measures that will truly end a practice they see as murder while rejecting any proposals seen as half-measures.”

The increasingly draconian measures enacted or simmering at the state level — outright bans, attempts to ban pregnant people from traveling out of state for abortions, attacks on the “morning-after” pill — reflect a militancy, or extremism, that is about to become a force across the Republican field. The same polarization that has effectively weeded out pro-abortion rights Republicans and anti-abortion Democrats in Washington means that GOP candidates will be positioning themselves harder and harder to win the support of social conservatives, for whom “leave it to the states” will be weak tea.

The argument here is not that abortion will sweep Republicans into power in Congress this fall; it’s that the historical drag on Democrats, Biden’s weak approval ratings and the possibility of energized voters on both side of the abortion issue will produce a GOP Congress in November, whose members will be disposed — out of conviction or political pressure — to vote for a national ban.

That dynamic is likely to be present in 2024. If Trump runs, he will run as the hero of the social right — the candidate who promised to appoint anti-abortion judges, and who did. If he doesn’t run, those who would be his heirs will be looking to stake out the same kind of ground Trump did in 2016. A national abortion ban, at least in the Republican primaries, would be a powerful argument. As for its impact in a general election, Republican moderates have been predicting for 40 years that a hard-line approach on abortion would be political suicide. The 1980 GOP platform called of an outright ban on abortion — and that fall, Ronald Reagan won 44 states. It could be that the idea of a national ban is a bridge too far; but the millions of New Yorkers and Californians won’t be voting Republican anyway. To put it mildly, the expectation that abortion extremism would hurt Republicans has been essentially unfulfilled for decades.

So, if in 2025 a Republican Congress and a Republican president seek a national ban, won’t the same filibuster that has bedeviled Democrats block Republicans? Sure — unless you remember that the Senate’s biggest filibuster champion, Mitch McConnell, had no qualms about dropping the 60-vote threshold for Supreme Court nominees when Neil Gorsuch was up for confirmation. If Democrats could spend years demanding an end to the filibuster, at least for voting rights, then there’s no reason to think a foolish consistency would stop Republicans from scrapping it if the issue was “protecting innocent human life.” Indeed, depending on the nature of the Senate GOP caucus, it may be McConnell’s way of saving his leadership. (All this assumes that Republicans won’t accumulate a 60-vote majority after the 2024 campaign — a year with a daunting Senate map for Democrats.)

And make no mistake: Such a law would not show many signs of accommodation. Roe’s foes have made a point of noting that before the 1973 decision, a third of the states changed their laws to make abortions available under a wide set of circumstances. (Reagan regretted that he’d signed a bill as California governor making the procedure widely available). But a national ban enacted by Republicans is unlikely to give much weight to the preferences of New Yorkers or Californians; spurning liberals in blue states might even be part of the law’s appeal.

What I’ve outlined here is only a possibility. Now that the repeal of Roe is all but certain, the scrapping of a half-century-old right could trigger a rush to the polls that upends the conventional wisdom that Democrats will be swamped in November. If Democrats can hold the White House in 2024, the national abortion ban idea disappears, at least for four years. There may also be institutional Senate Republicans who would refuse to scrap the filibuster.

What’s striking, however, is that the bedrock assumption of what a post-Roe world would look like — 50 states each with their own policies — may wind up being far different than what we might be living with a few years from now.

Previous ‘Are you going to cave?’ GOP primaries pit ‘fighters’ against ‘governing wing’
Next Opinion | Abortion Might Not Be the Wedge Issue It Used to Be

‘Are you going to cave?’ GOP primaries pit ‘fighters’ against ‘governing wing’

Why You Should Get Your REAL ID Now

Uh-oh: You have to go to court. Whether you’re a plaintiff, defendant, lawyer, or witness, …